It has been reported that Arsenal have maintained interest in Schalke striker Klaas-Jan Huntelaar. 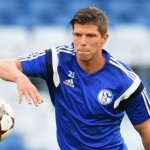 The Gunners were keen on the Holland international in the summer transfer window but did not get a deal over the line, forcing him to remain in the Bundesliga.

Huntelaar has been in fine form for Schalke so far this term, scoring four goals in nine outings including two in two Champions League fixtures, which has also sparked interest from both Liverpool and Tottenham.

The Express suggests that the former Ajax star, who has had stints with AC Milan and Real Madrid, is now ready to make the move to play in England’s top flight with a January shift to the Premier League a possibility.