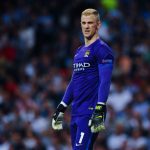 It has been reported that Thierry Henry was critical of Manchester City goalkeeper Joe Hart after Arsenal scored the first of their two equalising goals on Sunday.

Sergio Aguero had put City ahead with a fine left-footed strike in the eighth minute at the Etihad Stadium before Olivier Giroud headed home a corner which came as a result of a poor backpass from Gael Clichy, which prompted laughter from Hart.

Following the incident, Gunners legend Henry wondered why the England number one would react as he did when giving away such an unnecessary corner, leading to the 10th-minute leveller in the eventual 2-2 draw.

“You have to give Arsenal a lot of credit. Giroud is alert and crosses the ball but you have to wonder why Clichy is trying to give that ball back to Joe Hart,” he Frenchman said on Sky Sports.

“I cannot understand it really. You find yourself in the situation now where you put Arsenal in the position to have a corner kick and maybe score.

“You can see him (Hart) actually saying ‘away’, ‘away’. So Clichy should clear that ball, he’s trying to be clever.

“But I can assure you, I played with Jens Lehmann, if you do that to him he would’ve grabbed you by the collar of your neck and let you know what he thinks about you.

“And what happened after? They score. I know Giroud didn’t score for 15 games but his heading is one of his best attributes. For me I think it’s just really poor.”