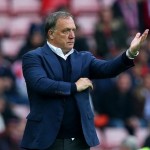 The Dutchman is expected to quit Sunderland after today’s clash with West Ham United.

Keown told BBC Sport: “It doesn’t look like he is going to be there for the long term and as we have seen that can affect the transfers and also could be affecting the players as well.

“In the past they’ve had a lot of younger managers like Roy Keane, Paolo Di Canio and Gus Poyet and that hasn’t worked for them, so I understand why they went for someone like Advocaat with his experience.

“Advocaat is a strong enough character I feel, but I think they need to make that change now for stability.”