It has been reported that Arsenal legend Emmanuel Petit has hailed the impact of Mesut Ozil since his arrival from Real Madrid. 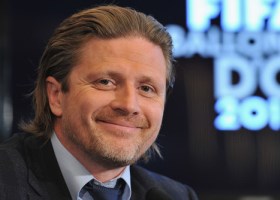 Petit wrote in the Daily Mail: “The most important change for Arsenal this season is the signing of Mesut Ozil. When you look at the beginning of the season, Arsenal were struggling. The players were questioning themselves over the quality of the squad and whether they would go another season without winning a trophy.

“But with Ozil, everybody knows how he plays, his quality as a human being and I am sure that has helped with the confidence to bounce back from that opening day defeat against Aston Villa. The fact that he has settled so quickly into the dressing room and on the pitch because he speaks the same football as Arsenal has helped a lot, too.

“We all agree that with Jack Wilshere and Aaron Ramsey the next generation of British football is talented and very gifted. But can you give the keys of the team to those players? No. That is why Ozil is very important because he is like a big brother to them – he was the perfect signing.” Arsenal Closing In On Juventus Star Arturo Vidal, Thanks To Alexis Sanchez