Reports are out claiming that Arsenal legend George Graham says they need to make a striker signing. 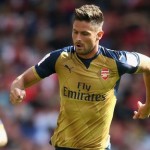 Graham was speaking after the stalemate with Liverpool.

“Arsenal need an out and out goalscorer,” Graham told talkSPORT.

“They’re not making enough chances up front and they’re not taking their chances either.

“They need a striker who can get 25 league goals a season if they want to win the Premier League – but where are they?

“We’re all looking around the country looking for the great strikers and great centre halves – they’re already with top clubs and they’re not available.”