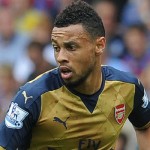 The French international midfielder already had a yellow card to his name when he clumsily brought down Yannick Bolasie early in the second half of the Gunners’ eventual 2-1 win over Crystal Palace at Selhurst Park, before another poor challenge on James McArthur.

Arsenal boss Arsene Wenger believes Coquelin did not deserve a second yellow for the challenge but club legend Henry tended to agree with Palace boss Alan Pardew who felt the player had luck on his side not to get his marching orders from referee Lee Mason.

“In the second half, since you come out and are still on a yellow, you do not need to commit in the way he did,” Henry said on Sky Sports.

“You have to be smarter, play with your brain. Go, put pressure, stop.

“He left himself exposed for a red card and he got lucky he was allowed to be substituted.”