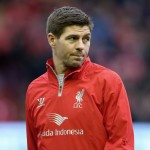 It has been reported that Arsenal legend Thierry Henry says Steven Gerrard has chosen the right MLS club for himself in LA Galaxy.

A four-year stint in MLS with New York Red Bulls leaves Henry well placed to explain what the Liverpool captain can expect in California.

“He will arrive in a team that is already on tune,” said Henry.

“They have either been winning or losing in the final every year and are a very good organisation.”