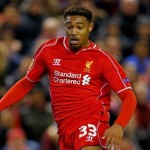 Ibe started in their win over Southampton today.

“One of his mistakes, he got caught ball-watching, but he did his work really well,” Henry told Sky Sports.

“Today he had an amazing performance. He wasn’t [doing] step-overs and nutmegs, but he showed maturity in the game at an early age.

“He knew at one point that he needed to tuck in. It’s the way he did it, to show that he could cover his back three. He never gave up, he always worked hard for his team-mates, and that’s how you earn respect.”