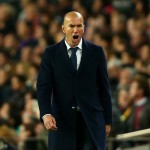 Reports are out claiming that former Barcelona striker Thierry Henry sung the praises of Zinedine Zidane for Real Madrid’s win on Saturday.

The Arsenal legend felt Zizou proved himself tactically for the El Clasico shock.

“I loved the tactics employed by Zidane. They were not afraid, exerted pressure when needed and kept their composure when they went 1-0 behind on the scoreboard,” said Henry.

“Zidane realized that he had to look at the midfield. And he did. People wanted to know if Zidane could do something tactically against Barcelona. And he did.

“Madrid deserved the victory, were better in the second half. Even going 1-0 behind and with ten players.”

Henry added: “Knowing Barcelona and the Catalans this will create a little doubt. This defeat can generate nerves.”