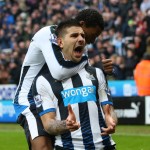 Reports are out claiming that Arsenal legend Thierry Henry insists Newcastle United are not a big club.

Henry did praise the “amazing” fans on Tyneside, but feels the club only have the potential to be a big club in England.

Henry, speaking on Sky Sports News, said: “I played there, they are very, very demanding.

“I think are dying to see a successful team. They had one in the 1990s but didn’t manage to win the Premier League. Having a big stadium and big fanbase doesn’t make you a big club.

“It’s what you have inside the stadium and how many trophies you have that makes you a big club.

“So the capacity of them being a big club is definitely there, but are they a big club really?

“You have to show your trophies. How many titles or cups did you win?

“I am not saying that just about Newcastle, it goes with everyone. You have to show what you have one.

“They have the potential to be a big club, definitely, those fans are amazing. It is always hard to play there, but big club? I’m not sure.” AS Roma Confident Of Beating Arsenal For Adrien Rabiot