Reports have emerged claiming that Barnsley striker Sam Winnall has revealed that Arsenal legend Thierry Henry was his childhood hero. 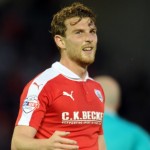 Winnall has been creating a name for himself following his exploits in front of goal with Barnsley in recent times. A boyhood Arsenal fan, Winnall has now revealed that he used to visit Highbury every week with his father and stated that Gunners great Henry was his hero growing up.

When asked who was his childhood hero, the striker told the Daily Mail: “Thierry Henry.

“I grew up on the North Bank at Highbury, going every week with my Dad. I was lucky enough to witness one of the best players to ever play in England. I saw him at his peak and he was always my hero because he brought so much success to Arsenal.

“I was living in Wolverhampton, but me and my Dad used to travel down to every home game. My Dad’s also from Wolverhampton but he was an Arsenal fan growing up. His favourite player was Charlie George. And then when I was born he passed it down and I became a Gooner as well.

“It’s hard to take anything from Thierry Henry’s game into mine because he was one of the best players to ever play in the Premier League, but I was a big fan of his finishing. He was always so calm in front of goal, he never looked flustered, so I try to look the same way and try to be as calm as possible when I get a chance.”