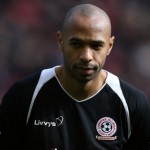 It has been reported that Thierry Henry was full of superlatives for Jermain Defoe after his stunning volley gave Sunderland another Tyne-Wear derby win over Newcastle United on Sunday.

Former Tottenham striker Defoe produced a top-drawer volley from outside the area on the stroke of half-time to send the Black Cats fans into raptures at the Stadium of Light.

The goal was enough to give Dick Advocaat’s Sunderland side a 1-0 victory to make it five north east derby victories in a row as well as helping Defoe break a near two-month goal drought which brought the 32-year old to tears.

“I think he is crying,” said former Arsenal star Henry on Sky Sports’ ‘Super Sunday’. “You have to love this type of emotion, it is amazing, it sums up the day.

“It was worth the wait, we said he had to deliver and he did – what a goal. That is where you want Jermain Defoe and we were saying before the goal that he was struggling with his position as it’s very demanding to play out wide and he is not used to that, especially at his age. But you can’t wish for more than that.

“The technique is great but I like the way he put himself in that zone, where he knows the ball is going to land, then it is Jermain Defoe at his best. It’s outstanding.

“The club needed that goal, they are fighting to not go down. What he was going through was what the club is going through right now. Scoring that goal means a lot to him and a lot to everybody in the stadium.”

Per Mertesacker Desperate For Arsenal To Maintain Current Form

Gibbs: Swansea game will be “one of our biggest” this season