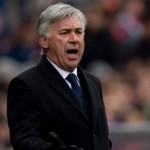 It has been revealed that Thierry Henry has indicated that the Premier League would welcome Carlo Ancelotti back with open arms.

The Italian tactician is being heavily linked with a Real Madrid departure after the Spaniards failed to defend their Champions League title and Henry says his presence would be a positive in England.

“I think we will be happy to see him back in the Premier League,” Henry said on Sky Sports.

The former Arsenal and Barcelona striker added that he expects Ancelotti to get the chop after a trophy-less season at the Santiago Bernabeu.

“This is Real Madrid. If you don’t deliver something every year, I’m afraid you have to go,” he added.

Ancelotti managed Chelsea to the 2010 Premier League/FA Cup double during his two-year stint at Stamford Bridge.