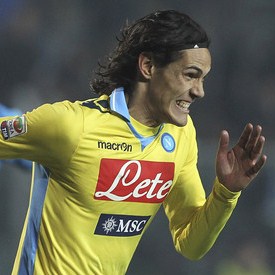 Wright wrote in his column for the The Sun: “Without a top-class attacker alongside Robin van Persie, Arsenal are only one injury away from everything blowing up in their faces.

“”That’s why I think Arsene MUST bid for Napoli striker Edinson Cavani — El Matador — if there is any chance of tempting him from Italy next month. ”

“It will be more difficult now Napoli have reached the Champions League knockout stages, largely thanks to his performances in the group games.

“But plenty of other clubs around Europe haven’t given up the ghost, and I’d love to see Arsene in the mix as well.

“If, heaven forbid, anything did happen to RVP, you’d fear Arsenal would be stuffed. That’s a ridiculous pressure to carry on your shoulders every week.”