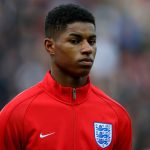 Reports are out claiming that Arsenal legend Sol Campbell has welcomed the emergence of Manchester United striker Marcus Rashford.

The 18-year-old scored eight goals in 18 appearances before netting within three minutes of his England debut.

Rashford was rewarded and penned a new deal with United this week, keeping him at the club until 2020.

“It’s great [that he has been discovered]. United have always had a tradition of bringing on young British stars,” Campbell told the Guardian.

“It’s happened by default really – they had to keep on going down and down into the depths of the youth team, and they just stumbled on him.

“It helps that nobody knows what he does. When you start getting studied, you’ve got to go to the next level.

“And he has no fear, which is fantastic. At the moment he’s having fun, that’s the main thing.”