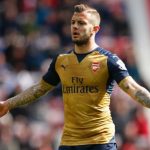 The 24-year-old was also thrown into the mix during Arsenal’s 2-2 draw with Manchester City following an injury to Danny Welbeck.

“Roy Hodgson names his squad on Thursday and I am sure he has a plan for Jack. If he is fully fit, you have to take Jack to France,” Henry wrote in The Sun.

“Hodgson knows he is going to upset some players but Wilshere was a key asset in the qualifying campaign.

“The little man is special. You have to treat him in a special way.”

Henry also claims Wilshere needs as much game time as possible to force his way back into Hodgson’s England set up.

“I never suffered a long-term injury and so I do not know how long it takes to get back to full sharpness,” Henry added.

“But Wilshere needs as much game time as he can get to force his way back into the England team for the Euros.”