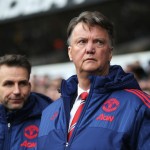 Former Chelsea boss Jose Mourinho is tipped to take over from Van Gaal in the summer as the Red Devils look to shake things up at Old Trafford.

Wright told BBC Radio Five Live : “Both Moyes and Van Gaal have both admitted that they made mistakes,”.

“The next manager has to be somebody massive in stature and is going to sort it out.

“They can’t afford to get someone like Van Gaal with the experience and name and it doesn’t work out. I don’t think they can do it again. It would be disastrous.” Welbeck On Fire For Club And Country – Alex Oxlade-Chamberlain