Reports are out claiming that Paul Merson believes the North London derby between his former club Arsenal and Tottenham Hotspur this weekend is one of the biggest in history. 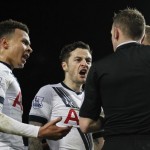 The Gunners take on Spurs at White Hart Lane on Saturday with the two sides sitting third and second respectively on the Premier League table.

Merson was involved in some massive NLD’s during his time as a player but feels this one has an unprecedented importance due to the fact that there is a league title up for grabs.

“I think the FA Cup semi-finals in 1991 and 1993 would be bigger,” Merson told this week’s ‘The Fantasy Football’ podcast for Sky Sports.

“They were massive games, although they are always big.

“When I used to be on holiday prior to the season, in pre-season before the fixtures came out in June, I would always ring my dad and say: ‘When is the Tottenham game?’ Always, the rivalry is that big.

“But now, this is probably the biggest it has been for many a year because both teams could win the league.

“When I was playing for Arsenal, you were there not to like Spurs. It was the big game and you always got that feeling when you drove into the ground and felt the atmosphere, for both teams home and away.”