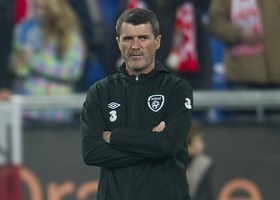 Keane was unforgiving in his comments when asked about his former Manchester United, as he suggested Ferguson was ‘ruthless’ and ‘didn’t know the meaning of loyalty’ in a sustained attack throughout the compelling documentary.

“When he left Manchester United, his opinion changed about Alex Ferguson and I thought he went out of his way to say as many bad things as he could about Ferguson. I thought it was wrong,” Brady told RTE.

Brady suggested Keane’s assertion that Ferguson was still eager to hang onto some power at United was unproven, as he questioned the motives of those comments.

“We don’t know how true it is that Ferguson is still striving for control or power,” he added. “That might just be Roy Keane’s opinion.

“I haven’t seen Ferguson interfere at all (with the team) this season. That he is controlling Moyes in some way.

“Who is more qualified to pick a success. The Glazers or Ferguson. He knows a bit more about football than they do.”