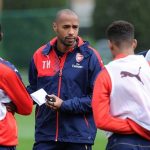 Reports are out claiming that Arsenal legend Thierry Henry says the rivalry between Manchester United and Manchester City will jump a level thanks to their new managers.

Henry is intrigued by the renewal of old rivalries between Jose Mourinho and Pep Guardiola – who he played under at the Nou Camp – and who will manage Manchester City next season.

“City and United is already a massive rivalry but even more now with Jose and Pep involved,” said Henry.

“It’s going to be a nice one and I’m looking forward to it.”