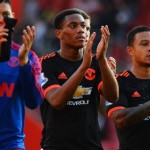 Martial, who struck twice at Southampton yesterday, joined United from AS Monaco for a fee rising to €80 million.

Petit wrote in France Football: “This is the law of the market today, it was not even twenty years ago. I’m not saying it was better than before but the system was then built on meritocracy

“(Zinedine) Zidane was the biggest transfer in French football but he left Juventus for Real Madrid with a lot of titles, with proven value.

“I do not say that Martial has no potential, but we are dealing here with pure speculation, speculation that has become the norm. We no longer speak of players but market values recorded in the balance sheets.”