Reports are out claiming that Paul Merson has predicted a 3-1 home defeat for Tottenham in their Premier League clash against Crystal Palace on Sunday. 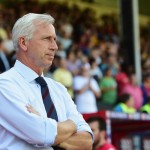 Former Arsenal ace Merson believes the game against the high-flying Palace side will come too soon for Spurs after their Europa League win over Qarabag on Thursday.

Merson writes for Sky Sports: “Tottenham fans are not going to be happy with me. I went with them last week at Sunderland, but not this week! After playing on Thursday, going up against Palace, who are flying and were unlucky against City, just plays into Palace’s hands away from home.

“It is not through bias, I just think Palace have the pace to catch Spurs. Tottenham fans are going to turn up and be begging their team to get forward. But there is no Ryan Mason, no Mousa Dembele, there are too many out.

“Spurs should have more points than they have, that’s true, but they haven’t and there must be a reason for that. Palace have just been to Chelsea and beat them well, and I’ll be backing them for a win here.”