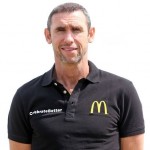 Reports are out claiming that Martin Keown has been handed the role of co-commentator by the BBC for England’s games at Euro2016.

Reports suggest that the former Arsenal captain will be in the hot-seat for live Three Lions fixtures in France in a similar role given to Phil Neville ahead of the 2014 World Cup.

Keown has impressed with his work in recent months and was given a chance to further enhance his name during the coverage of the FA Cup final between Manchester United and Crystal Palace.

It is understood that Keown will operate alongside former Leicester City, Derby County and Wales star Robbie Savage in a dual co-commentator role.