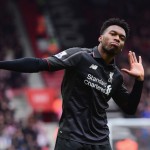 Sturridge has been linked with PSG as a replacement for superstar Zlatan Ibrahimovic.

Wright told The Sun: “I think PSG signing him would be good for Sturridge.

“Going to Paris will be a huge change of life and culture.

“This will surely be exciting for him.” Ranieri Taunts Arsene Wenger: An Arsenal Loss Would Be DISASTER