Arsenal’s Champions League hopes were dealt a huge blow after they succumbed to a humiliating 3-1 home defeat at the hands of Monaco in the Round of 16 clash last month. 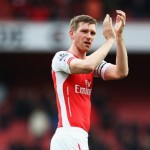 That result suggests to many that the Gunners are all but set for an exit from Europe’s premier club competition on Tuesday night.

As a glimmer of hope for Arsenal though, they have managed four consecutive victories since their debacle against Monaco and with momentum on their side – the Gunners’ faithful are carrying a bit of hope that their side can pull off a remarkable comeback ahead of the second leg at the Stade Louis II.

Legendary goalkeeper Bob Wilson is one of the many Arsenal supporters who believe that the north London side can emerge victorious from the tie and the Gunners’ legend has gone on to state that if his former team are pull off what would be a famous victory, the influence of experienced defender Per Mertesacker will be vital.

Speaking to the Express, Wilson said: “Ultimately, I think it comes down to Per Mertesacker. He has experience and is a good influence in the dressing room.

“But all the players almost have to be abusive to each other – get each other fired up before they go out there. Then when they are on the field, if somebody tries something and it doesn’t work, they’ve got to say to each other, ‘That’s great! Try again – keep scaring them!’

“The way to get round them is to face them one-on-one and take them on. They may be brilliantly-organised but each of the defenders has his own individual weaknesses. Nothing exposes that more than pace.

“Moreover, having seen Arsenal get the 3-0 result they need against West Ham on Saturday, Monaco must be aware of what the team is capable of.”