Reports are out claiming that Arsenal legend Ian Wright believes the Gunners’ lack of recent success in the Champions League could prompt star player Alexis Sanchez to leave the club. 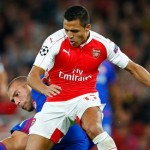 Arsenal suffered a shock 3-2 defeat to Olympiakos at the Emirates Stadium on Tuesday, leaving them facing an uphill battle to qualify for the knockout stage of the tournament.

Wright believes the poor showing may lead Sanchez to reconsider his future at the club.

“Normally we are out by the last 16 but this time we have massive hill to climb,” Wright said on BT Sport.

“And if we are going to be going out at this stage, people like Alexis Sanchez are going to start looking over their shoulder.

“How are you going to keep hold of him? Look at him, he was the stand out player tonight.”