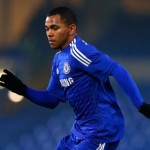 Reports are out claiming that Arsenal legend Ian Wright is convinced by the quality of Chelsea fullback Jay DaSilva.

“He’s already better than all left backs in the Premier League,” said Wright of the 16 year-old.

“Also Tammy Abraham, Charlie Musonda and Charlie Colkett are good players who are on the right path.”

Chelsea won the UEFA Youth League title after beating Shakhtar 3-2 in the final.