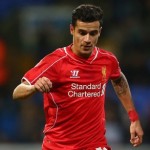 The Brazilian international was impressive in the Reds’ 2-0 win at Southampton on the weekend, scoring a stunning goal from range in the third minute, and having an overall impact on the triumph.

It was only a matter of a few weeks ago when Liverpool fans were moaning about the output of Coutinho but Wright feels the former Inter Milan now holds the key to the success of the Anfield club this term.

“It’s odd to think that just a couple of months ago, some Liverpool fans were getting more and more frustrated at the end product from the Brazilian, for all his tricks and flicks,” the former Gunners striker wrote in The Sun.

“Yet going to a back three has taken some of the defensive shackles off and Coutinho has been outstanding, and his performance on Sunday was just another example.

“If he can maintain that form, the top four, FA Cup and Europe will all remain in sight.”