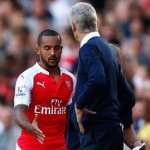 The England international was given the nod over Olivier Giroud in the last two Premier League fixtures and scored in the 2-0 victory over Stoke on Saturday.

“Everyone has had their say on Arsenal’s failure to bring in another striker and now I hope Theo Walcott is given a genuine run of games up there,” Wright wrote in The Sun.

“The Gunners will always create chances and I feel it’s time to unleash Theo and let him prove he can do it.

“The challenge is for the likes of Aaron Ramsey, Mesut Ozil and Santi Cazorla to release him as quickly as possible when he makes those runs. CONFIRMED : Wojciech Szczesny To Start For Arsenal Against Middlesbrough