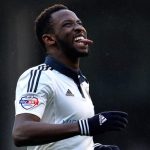 Reports have emerged claiming that Arsenal are moving for Fulham striker Moussa Dembele.

ESPN says the 19-year-old’s contract is set to expire and he has a host of clubs chasing his signature.

Chelsea invited Dembele to a game at Stamford Bridge in April, Liverpool and Manchester United were previously linked with the French starlet while reports in Turkey last week suggested his agent had met with Galatasaray.

Arsenal have joined the race with Arsene Wenger on the hunt for new strikers.