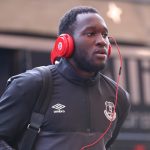 Reports have emerged claiming that Arsenal are set to make a move for Everton’s Romelu Lukaku.

According to TuttoMercatoWeb, the Gunners are showing significant interest in the Belgian striker and could quite possibly pursue his services.

Lukaku has been heavily linked with a number of clubs in recent months, including former side Chelsea, Manchester United, Juventus, Bayern Munich and PSG, and it is understood that Arsene Wenger is also keen.

With Leicester City’s Jamie Vardy unlikely to join Arsenal anytime soon, Wenger has focused his attention elsewhere and is believed to be pondering a big money move for 23-year-old Lukaku.

Arsenal Teen Serge Gnabry : I Can Make A Real Contribution!