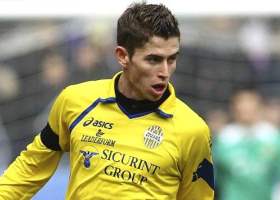 The Daily Star reported that the Frenchman is keen to add to his squad in January to build on their superb start to the new season.

It is said that the 63 year old has identified the Italian U21 international as key target and is readying a £10m bid to tempt Verona to part with their young star.

According to reports in Italy, Jorginho’s representatives were in London yesterday to speak with Arsenal over a proposed January move to the Premier League.