Reports are out claiming that Arsenal boss Arsene Wenger is launching a bid for Bayer Leverkusen midfielder Lars Bender. 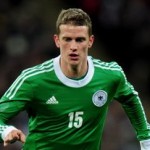 The Mirror reported that the French tactician wants a holding midfielder, and the Gunners have gone back to their first choice in that position and want to do a deal for Bender.

It is said that the Londoners have tracked the 25 year old for more than a year and are hoping to now get their man for £15m.

Leverkusen are reluctant to sell but Arsenal are hoping they can lure him with a big contract and the offer of Champions League football.