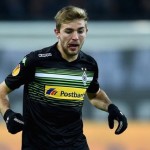 Reports are out claiming that Arsenal are preparing a major bid for Borussia Monchengladbach midfielder Christoph Kramer.

The German international is on-loan at Gladbach from Bayer Leverkusen.

The Mail on Sunday claims that Arsenal are ready to make a £20million January move for Germany international Kramer.

Sunday’s fixture against Liverpool at Anfield, which they lost 5-1 last season, is an uncomfortable reminder of the defensive deficiencies of the team.

And with Arsene Wenger reluctant to buy a stop-gap player in the January window, he would clearly rather pursue a leading target and see if there is a possibility of concluding a deal now, even though getting the midfielder out of Mönchengladbach is extremely complicated.