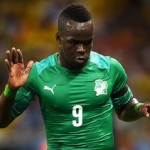 Reports are out claiming that Arsenal are lining up a bid for Newcastle United midfielder Cheick Tiote.

The Mirror reported that Arsenal are preparing an £8m bid for Tiote.

It is said that Arsene Wenger has reportedly turned his attention to landing the tough-tackling former FC Twente player after previously chasing top targets Sami Khedira and William Carvalho.

The 28-year-old Ivory Coast international has been linked with a move to the Emirates in the past, but Newcastle are believed to be ready to do business this time.