Reports have emerged claiming that Arsenal are set to make a bid for Paris Saint-Germain striker Edinson Cavani. 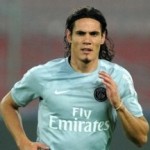 It is said that the 27-year old has re-emerged on the radar of the Gunners with various reports suggesting that they are prepared to offer £51million to lure him to north London.

The Uruguay international striker has stressed this summer that he is no hurry to leave the French champions but could exit Parc des Princes if Laurent Blanc is successful in his pursuit of Real Madrid winger Angel Di Maria.

PSG are eyeing the Argentina international who appears to be on the outer with the Spanish giants who signed Toni Kroos and James Rodriguez earlier this summer.

Arsenal boss Arsene Wenger is determined to add Cavani to the quality capture of Alexis Sanchez from Barcelona but it looks as though the deal will only be possible if Di Maria moves to the French capital.