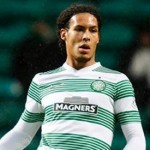 It has been reported that Arsenal are eyeing Celtic defender Virgil van Dijk.

It has been reported that the Gunners have been left with just six front-line defenders after selling Thomas Vermaelen to Barcelona in the summer window.

Gunners boss Arsene Wenger will seek to negotiate a loan with a view to a permanent deal for Van Dijk in January.