Reports are out claiming that Arsenal could be set to launch a shock bid for Ukrainian attacker Andriy Yarmolenko. 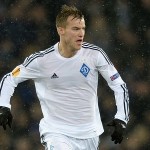 Dynamo Kiev star Yarmolenko was previously linked with both Liverpool and Everton, but The Express has revealed that Arsene Wenger is interested in bringing the 25-year-old to the Emirates Stadium this winter.

Wenger sees Yarmolenko as an ideal replacement for the oft-injured Danny Welbeck and to fill the void left by Theo Walcott, as he continues to evolve into a quality centre forward.

The Ukraine international can play out wide or through the middle and guided his club to the Ukrainian Premier League last season.

Reports suggest that Wenger believes Yarmolenko would fit perfectly into the Gunners squad. David Villa Won’t be joining Arsenal in the summer