Reports have emerged claiming that Arsenal are moving for Nice goalkeeper David Ospina. 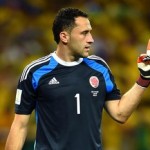 The Daily Star reported that signing back-up for current No.1 Wojciech Szczesny is a top priority for the Gunners after Lukasz Fabianski’s departure.

The 25 year old plays for Nice and is boss Arsene Wenger’s preferred target for the role after impressing at the World Cup.

Ospina caught the eye during Colombia’s run to the quarter-finals and will be available for around £3m.