It has been reported that Arsenal are expected to go after Ezequiel Lavezzi in the January transfer window. 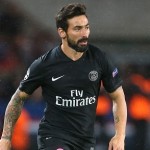 Calciomercato reported that the Gunners will make a last-ditch attempt to sign the Argentine forward who is believed to be in talks with Barcelona.

Lavezzi is out of contract at Parc des Princes next summer and will be free to speak to clubs outside of France when the winter window opens.

Arsene Wenger is continuing to monitor the 30-year-old former Napoli star and believes he would represent great value if the Gunners are able to lure him to North London as a free agent.