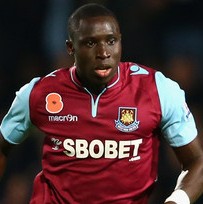 The Sun reports that Arsenal are lining up a move to nick West Ham midfielder Mohamed Diame.

The Hammers have offered the Senegal star, 25, a new deal just six months after he joined from Wigan Athletic.
But it depends on him agreeing to double a release clause to £7million.

Diame has yet to sign and the Gunners are keen on him — just as soon as he proves his fitness again.
He tore a hamstring last month but was an unused sub in Saturday’s loss at Sunderland.

He is set to play in the FA Cup replay at Manchester United tomorrow.

Arsenal plan to watch him then and are poised to make a £3.5m bid.

I Want to Coach a Premier League Team – Guardiola


Ronaldo and Mourinho in Furious Bust-Up!