It has been revealed that Arsenal have PSG striker Edinson Cavani lined up for a deadline day deal. 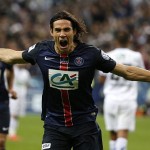 The Sun claims that the Gunners will try to make the Uruguay international their marquee summer signing before deadline day.

The former Napoli star has constantly been linked with a move to the Premier League and Arsene Wenger’s desire for a big-name forward will reportedly see him swoop for the PSG man.

Wenger insists that he is ready to gamble with this transfer kitty after rivals Manchester City and Chelsea both splashed the cash last week.