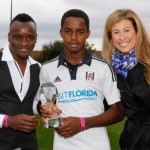 The Daily Telegraph has reported that Arsenal are eyeing a double swoop for promising youngsters Ben Chilwell and Ryan Sessegnon in the summer.

The Gunners were widely tipped to sign Leicester City left-back Chilwell in January while they were also said to have made a bid for Fulham young gun Sessegnon on deadline day.

Arsenal were ultimately unable to pull off both transfers but now according to reports, Arsene Wenger is expected to reignite his interest in the promising duo during the summer window.