It has been reported that Arsenal are being linked with AS Roma midfielder Adem Ljajic. 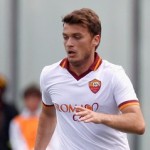 Calciomercato.com reported that Gunners boss Arsene Wenger is maintaining an interest in Ljajic.

The 22-year-old saw a move to Manchester United collapse back in 2010 over work permit issues but the player would relish a second crack at the Premier League.

Arsenal could use Lukas Podolski as a makeweight in any deal despite Wenger’s insistence the German won’t be sold in this window.