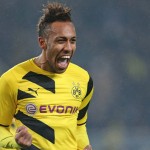 Interesting transfer news are out claiming that Arsenal are being linked with a potential summer move for Borussia Dortmund striker Pierre-Emerick Aubameyang.

Metro reports that the Gunners are lining up a £30million bid for the 25-year old Gabon international following the news that Jurgen Klopp is set to leave his managerial post at Westfalenstadion at the end of the season.

Aubameyang has scored 12 Bundesliga goals this season despite the fact Dortmund sit 10th on the table and has 19 goals in all competitions including one against Arsenal in the Champions League group stage.