Reports are out claiming that FC Porto defender Danilo has played down suggestions that he could be on his way to Arsenal this summer. 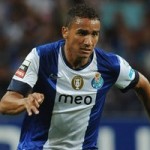 The 22-year old Brazilian international right-back is a reported target for the Gunners who are in the market for a new right-sided defender following the confirmed departure of Bacary Sagna.

Danilo, who has six caps for Brazil, joined Porto from Santos in 2012 and says he is no hurry to leave the Portuguese giants after becoming an integral part of the Dragons line-up in recent times.

“I’ll say what is usually said, I am contracted until 2016,” Danilo told ESPN Brazil.

“I am playing at Porto and have been playing well, which makes you get linked with top clubs.

“But there is a big difference between that and an offer that Porto accepts. I am happy at the moment and I am prepared to return to Porto.

“If something good for everyone comes along, we’ll sit down, but for now it is just speculation.” Cesc Fabregas – Should He Stay Or Leave?