According to reports in Italy, Arsenal are ready to sign Napoli winger Jose Callejon. 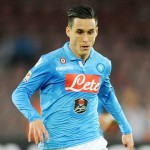 The Spanish winger is looking to exit the Naples club after former club manager Rafael Benitez moved to Real Madrid earlier this summer.

Sport Mediaset claims that talks are now set to begin between the two clubs over a deal, with Callejon ready to accept the switch.

The 28-year-old has scored 32 goals from midfield in the last two seasons and has been scouted by the likes of Liverpool and Sevilla recently. Arsene Wenger Insists Arsenal Will Challenge To The Title This Season