Reports are out claiming that Modena striker Khouma Babacar has welcomed interest from Premier League clubs. 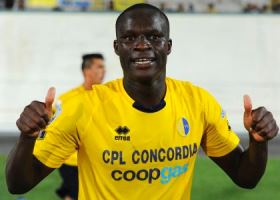 The Senegal U20 international is on-loan at Serie B Modena this season from Fiorentina and is being linked with Arsenal and West Ham United.

“It is very encouraging when you’re known to be followed by clubs like Arsenal: The Gunners are one of the best teams in the world, a club that does great things with their young players. Their coach has good reputation in being able to develop the talent of youngsters, but at this time I am under contract with Fiorentina: only they will have to decide if I should go to England.

“Through my agent, I received some contact with West Ham but I have not received anything official.”