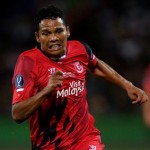 Reports are out claiming that Sevilla are being linked with Manchester United striker Radamel Falcao.

The Spanish side are concerned that they could lose in-form Carlos Bacca to Arsenal.

And they hope to capitalise on United’s uncertainty over what to do about making Falcao’s deal permanent by expressing their interest in the Colombian star.