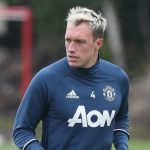 It has been reported that Manchester United are ready to listen to offers for Phil Jones.

The Sun says Jones is set to be dumped by boss Jose Mourinho in January.

The England defender is out injured with a knee ligament problem and United are looking to get him off their books.

He is on £110,000-a-week at Old Trafford and would cost around £10m, which Mourinho wants to reinvest into his defence.

And the 24-year-old’s situation is being monitored by both Arsenal and Liverpool who are ready to swoop.